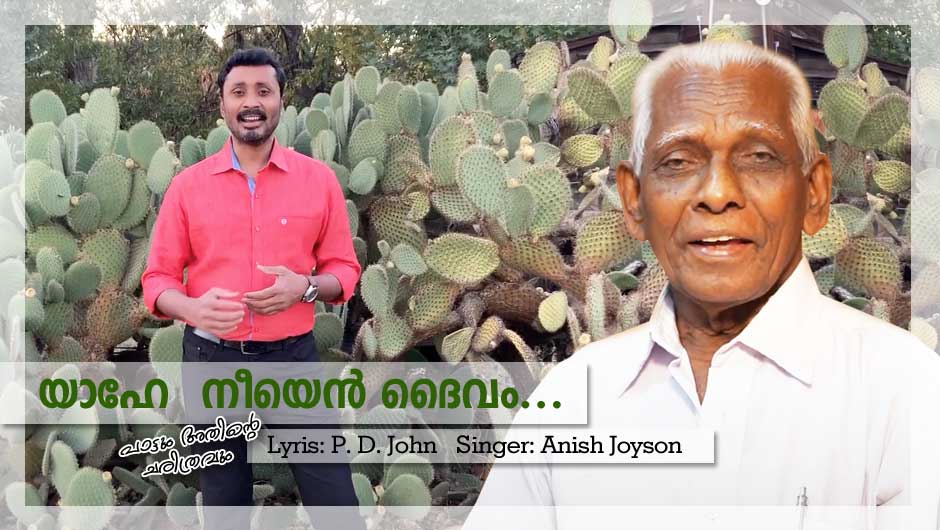 This song is called “YAAHE NEEYEN DAIVAM”. There is an inspiration behind this song: respected M.S. Varghese achen who is not present in our midst now but was on our team till he passed away was a very good singer. He would always encourage me. One particular year I didn’t write any new song for the Maramon convention. When I reached, the committee couldn’t see any song written by me. Immediately M.S. Varghese achen said, “There’s no way that you couldn’t haven’t written a song. Every year you present 3-4 songs,why didn’t you write any song this year? When you come for the next committee you should definitely bring a song.”  That night I came home and thought about what achen had said. I took my harmonium and other musical instruments and started playing a tune and writing the song. To create that tune I started working on the instruments and organ. Within an hour God gave me the song “YAAHE NEEYEN DAIVAM” that night. Immediately I slept and woke up around 5AM.I thought I’ll be able to give a song this year for Maramon convention. I prayed to GOD for his grace to write one more song and got up. After I got up I realized I need a praise song for the morning prayer. That same night I wrote one more song ”Sthuthippin Sthuthippin Yahin Namam Vazhthiduvin”. These two songs are twins because they were born on the same night. The song “YAAHE NEEYEN DAIVAM” was written with a desire to give a song to Maramon and because of M.S.Varghese achen’s encouragement.That same night I got the second song ”Sthuthippin Sthuthippin Yahin Namam Vazhthiduvin”. That’s how I wrote two songs on the same night.