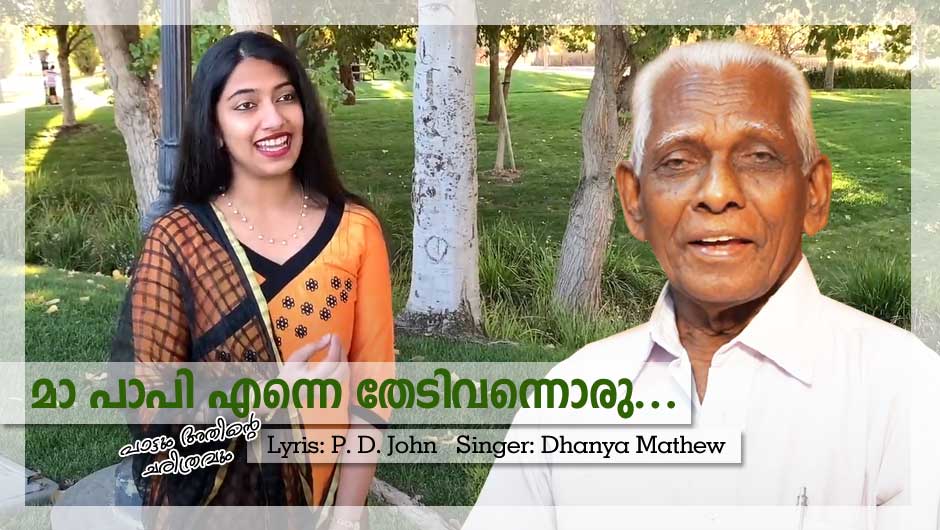 Greetings in God’s name. I am extremely happy to know that San Francisco Marthoma Edavaka Yuvajana Sakhyam decided to present a few of my songs as part of a special event. It gives me great joy and happiness to participate in such events these days. Before we get started I would like to share my experience for a few minutes and then we’ll proceed with the event. I was born and brought up at Kangazha in Kottayam district. I was brought up in Christian traditions and values. After my primary education, I was undecided on what to do next – will I end up doing nothing or should I choose the right path. During this juncture, I saw a big red flag coming my way. That flag has been to different parts of Kerala and finally it came to our village as well. It’s a social movement called Communism. Many youths came forward to join that organization. Honorable P.G.Ponnus came to Kangazha and took classes and taught us how to be real Communists. I remember one such occasion where wholeheartedly I decided to serve the organization. From my childhood days I have always liked songs and enjoyed singing them. My father had also arranged for a classical music teacher to teach me the first lessons in Carnatic music. Even when I was working in the organization, I was always inspired to write and sing songs. Looking at the flag,the hammer and the sword I used to write and sing songs about it. I can even sing a few lines. Once a gospel team came to our village and they had a very fruitful ministry. The convention lasted over a week. Me and all my communist friends used to go and attend the pastor’s sermon for fun. We used to sit in the last row, pass comments and assign scores for his sermons. On the last day, the Pastor who was also called “Unni Upadeshi” who has worked in different parts of kerala and outside kerala-”Unni Upadeshi and party”.His mother “Aleeyamma Ommen” was also an evangelist.Our ancestors know about the team and their works.I am trying to explain how as a youth I was involved in the team.So on the last day,we can see God’s manifestation and the works of the Holy Spirit among people. Pastor was pointing out his finger at everyone and asking if anyone was ready to work for the kingdom of GOD. Our leader filled with the Holy Spirit stood up and said going forward I am not going to work for communism and I desire to work for Christ and be a testimony wherever I go.Seeing our leader stand up all of us stood up and told our testimony.That was in 1952,last day of September. That day before Upadeshi left he asked does anyone among you sing well? ” We need a young boy who can sing well in our team.In those days after finishing my education not knowing what to do next and what job to apply for.When heard about God’s calling,without thinking much all of them said “This Johnny sings well.Take him and go”. Since then I used to go with upadeshi to all the different parts of Kerala and outside Kerala.It was a good team.I started working with that team.LIke that I submitted myself for God’s ministry.At that point I started to think how I used to write and sing songs for communism why can’t I do the same now.Thats when I wrote the first christian song-”Maa Paapi Enne thedi Vannu” realizing the joy of redemption in Christ. Along with me all the keralites celebrated the song which encouraged me to write more songs. That’s how I joined a team to create songs. In those days there was no one to tune these songs so we would take Film songs and use their tune to record the songs. Over 50 such songs were created as part of this team including songs like “Mutti Mutti Vathilil” and “Yen Maname Nin Adhaarathil”.

After this I got the opportunity to join the Sabha. I was at a gospel meeting in Maarikattu where I met Kombadi Bible Institute’s principal, Abraham Achen. Achen told me, “You have a lot of talent. Can you work for the Mar Thoma Sabha? Can you come to Kombadi to study?”. I agreed and went to Kombadi to study. While I was there, even before completing my studies, a conference was held which was led by Alexander Thirumeni, Theophilos Thirumeni and MM Thomas Achen. Achen said they had nobody in their group to lead the singing sessions and asked if there was someone who studied in the Institute that could help them out. NC Varghese Achen who worked at the institute suggested my name. So I ended up leading the singing for this three day conference. During one such singing session, M M Thomas Achen and Alexander Thirumeni who were sitting up in the balcony of the conference hall gestured to come meet them. I went up to meet them and Thirumeni asked me if I would be interested to work for the Yuvajana Sakhyam of the Mar Thoma church. At that time I was looking for any opportunity to work and so this opportunity to work for the Sabha was very welcome and I immediately agreed. “Then come over to the office tomorrow itself. I will hand you the appointment letter”, Thirumeni said. When I went to the office, M M Thomas achen and others welcomed me. “Do you know why you have been appointed to the Yuvajana Sakhyam? We are going to various parishes every weekend and conducting Yuvajana Sakhyam meetings. We have to sing songs and deliver messages as part of these meetings. So you need to join us as a music assistant” he said. So in 1952, I began work at the Yuvajana Sakhyam. We would go to the various parishes to conduct programs over the weekend. When I started there were only around 250 registered Sakhyams in the Sabha. By the time I left the Sakhyam, over 40 years laters, there were more than 1500 Sakhyams that were registered. With profound gratitude I can state that the 42 years I worked in the Yuvajana Sakhyam enabled me to reach a respectable position within the Sabha. And during this time I also wrote a lot of songs for the Sabha. KP Philip Achen, who knew me from earlier, asked me to join the Maramon Convention music team to write songs and sing on the stage. So with the encouragement of Achen as well as Alexander Thirumeni, I started writing many songs. Over the years I have had the opportunity to write over 250 songs for the Sabha as well on certain special occasions. Many of these songs are still popular to this day. For today’s program, I will be talking about a select few songs and the inspirations behind them.

MA PAAPI ENNE THEDI VANNORU
I already spoke a bit about it in my testimony earlier but it bears repeating — when the joy of salvation touches our hearts what else can we sing about other than the coming of our Lord and his many works of salvation. “Ma Paapi Enne Thedi Vannoru” is one such song that I wrote when I was touched by the joy of salvation and I am happy that you will be singing it.